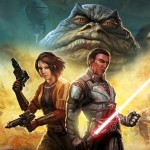 Many of us have been patiently waiting to get an official date out of the BioWare Austin studio for when their new digital expansion would finally hit the game. Well, the wait is over!

Today, Bioware Austin announced that Rise of the Hutt Cartel  would be launching on Sunday, April 14th, 2013.

As a recap, RotHC will introduce a new planet, Makeb. It will also raise the level cap to 55, add Legacy Achievements, include a new 8 and 16 man raid, and advance each class’ story arcs. This is all included in Game Update 2.0.

Interestingly enough they are allowing people who pre-ordered the expansion on or before January 7th, 2013 five days of early access to the expansion. I am curious to see how this will work. Will it be similar to expansions in wow where accounts without access just can’t travel to the new planet on their ship? If I can find out more info I will update this post.