Last weekend we at Video Game Loft all met up in Philadelphia for a weekend of brainstorming and gaming.

I’ll skip the boring stuff and just talk about the gaming. We never really go into these weekends with a game to play in mind. Most often we end up heading to a game store and grabbing whatever looks good. This method completely failed us this time around. We didn’t do our research and ended up with Dead Island. It had all the appearances of a great game, but it didn’t allow for split screen. So, that was a bust.

After about 20 minutes of browsing the X Box arcade looking for a treasure we came across Trine 2. I had remembered seeing this game during the steam sale and thinking that it looked pretty promising. In reality, it was perhaps the best pick up and play multiplayer game that we have ever snacked on during a weekend get together.

Trine 2 is playable by up to 3 different gamers. You can either split-screen, system link, or play over X Box live / The Internet / PSN. There are 3 distinct characters with very different roles that can be swapped between the players as you go. 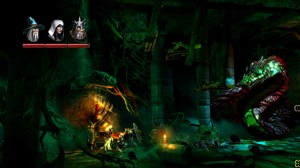 Pontious – Here was have a pretty classic Tank archetype. Pontius carries either a shield and sword or a giant hammer. These weapons can all be upgraded to allow for anything from a flaming sword to being able to throw the hammer. Pontious is a great character to use if you have to solo a boss and is most useful in the actual fights in the game.

Amadeus – This guy is a wizard but he is pretty far from your standard mage. Amadeus’ main responsibility is utility. He can create objects! This is a platformer in disguise so being able to create extra boxes and planks can be a real help if your jumping skills aren’t up to par (ours weren’t).

Zoya – She is described as being a thief. Her main weapon is a bow that can be upgraded to launch ice and fire arrows that can even explode! Her platforming prowess is probably the best of the three as she gets a grappling hook that can latch onto anything wooden in the game. She is perfect for getting those xp jars that are just out of reach.

Trine 2 is a multiplayer side scroller. Think Streets of Rage. However, the art style and level of detail in the level creation do a great job of making you forget it. You are tasked with following the Trine towards whatever adventure awaits. Along the way you run into goblins and dragons and spiders oh my!

If you are playing single player you have the ability to switch out your character on the fly to utilize whichever abilities you think will help you get across that chasm or defeat that goblin boss. If you are playing with 2 other friends then you all need to work together working within your role to pass whatever challenge is in front of you.

You will be jumping a lot in this game. You will be killing enemies (even the wizard can drop boxes on them). You will be solving small puzzles that mostly include trying to get flowing water to a certain section on the map.

Trine 2 is one of the most fun and best made co-op games I have played in a very long time. It took us about 10 hours to clear through the game and for $15 that is a big bang for your buck. If you like platforming and like playing with your friends then this is a great pickup for you.

If I could compare it to any game I would say try and imaging Little Big Planet with a fantasy spin.

I would definitely recommend this game.