Hidden Chests In Terror From Beyond | SWTOR

Terror From Beyond has finally been released today!

The operation is in my opinion the best thing to happen to this game in the past 4 months. The planet of Asation is gorgeous and does a great job of embodying the Star Wars spirit.

For those of you who are familiar with The Explosive Conflict, you will remember that there was a chest available after the first 3 bosses that contained Credits, Molecular Stabilizers and Synthetic Energy Matrices.

At first glance the new operation TFB does not have these chests. However, I found a couple!

Below is a media gallery showing screenshots that will lead you to the location of the chests. The chests seem to contain crafting materials so far and credits so far.

There is a fake wall in one of the chambers after the second boss that at first glance looks much like all of the other walls in that area. However, when I looked through I saw a patrolling mob on the other side! I got curious so I tried to go after it and I was able to run right through the force field. After killing the mob we looted the chest and the rest was history. Happy hunting! 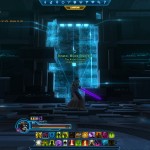 Looking at the fake force field inside the complex 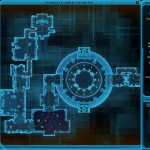 The fake force field is in front of my player on the map. 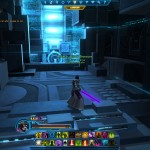 Directly in front of me is where you will find the chest.

Right after the puzzle boss you exit the inner complex back into the marshes. You will know you are in the right spot if you see a road in front of you that leads directly to the Hyper-gate  You will want to immediately turn to your right and you will see a large rock that appears to have an area behind it. Simple as that you will find the chest after killing a small group of mobs. 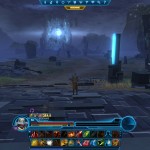 View from the mouth
of the complex exit. 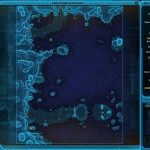 The chest is in front of the character arrow. 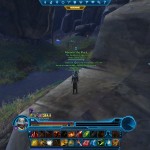 The second chest sits
behind a large rock.

#1  [Thurs.. 11:25am] There are reports of a second chest that I have yet to substantiate. It is possible that there could be more to be found. My group looked around pretty extensively but it wasn’t until we were at the final boss that we tried searching in earnest. So it is possible that the chest may have de-spawned. I will update this if I can get a fix on this second location.

#2  [Thurs.. 1:00pm] Second chest confirmed by many community members. We will be headed into SM TFB tonight to grab the screen shots of the second chest location and continue our search for more. Stay tuned.

#3  [Fri. 10:38 am] We found the second chest last night! The reports were correct and we have added a description and screen shot gallery above. Enjoy!