War of Heroes: Spider-Man VS Venom

Another event is upon us! This time we will be helping S.H.I.E.L.D. and Spider-Man protect The Daily Bugle from the villain Venom.

Many of the rules and strategies for this even have been covered for previous events.

The new rules are as follows:

New strategy based on new rules:

Current List of Raider Cards: These cards will buff your performance in the event!

This event is very different than the prior events because of how the new RDS gameplay system functions. There are still the typical ISO Shards that will be granted from killing or doing damage to a boss, as well as just for participating in a boss kill, but the mechanics of the fights are obviously different!! 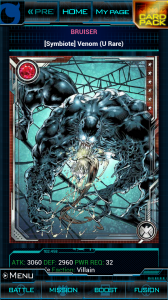