Our first Alliance/Player versus Alliance/Player event finally hits the interweb shelves!! For all of you Rage of Bahamut fans or ex players out there, here comes our version of the “Holy Wars.” It looks better than ever and here is our full walkthrough and guide to success!!

Fortunately for (us) they kept the Iso-8 shards idea, allowing us to get plenty of feeders, skill feeders, and vendor cards to fuel the fires that will rage between Alliances in this top tier event. Once per day you can acquire a ‘Trainer Power Pack,’ which has the same effect as a Power Pack, but is really only used for this event and disappears once it is over. Therefore, make sure to use the Trainer Power Pack first!

Fundamental Principles of the Event:

Here is a list of Event Cards and their special Abilities:

When considering your actions within a battle, prioritize your engagement against other players based on these factors: 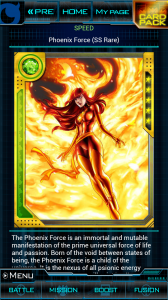 Rewards for this event based on rankings:

[Precise Shot] Hawkeye (Rare)
New Cards Added from ISO-8 Shards: [Advanced Intelligence] Ultron (S Rare)
There will also be many more rewards from completion bonuses of wins/personal valor points to the ISO-8 Shard rewards, so stay posted for the news!! Feel free to post questions here or in the forum, or just discuss anything you’d like. We’re all excited and we’ll see you in there!!
VGL_Justin
AkA. Kitosumi